By Michael Granberry for The Dallas Morning News
Feb 27, 2020

His book on the Kennedy assassination focuses on a character on the edges, while ‘Landfall’ probes the effects of Hurricane Katrina on a president’s legacy.

They are Landfall, a work labeled historical fiction, which takes a deep dive into the second term of President George W. Bush. Landfall refers to Hurricane Katrina, which left a lasting impact on the city of New Orleans and on the Bush White House.

But years before that, Mallon wrote one of the most memorable books ever written about the assassination of President John F. Kennedy. Mrs. Paine’s Garage studies the life of Ruth Paine, a woman living in Irving at the time of Kennedy’s death. She had taken into her home a struggling Russian immigrant and mother named Marina Oswald, who was, at the time, living mostly apart from her husband, Lee Harvey Oswald.

And, of course, Oswald became the lead suspect in the assassination of President Kennedy. The most shocking revelation of his arrest was something Paine was unaware of — that he’d concealed in a blanket in her garage the mail-order rifle used to assassinate the president. Thus the title Mrs. Paine’s Garage. Paine had done everything she could to help the struggling couple, including letting Oswald know about an opening at the Texas School Book Depository on Elm Street, where he landed the job and eventually built a sniper’s nest on the east end of the sixth floor, overlooking Dealey Plaza. As Mallon once told us about Mrs. Paine’s Garage, its theme might well be “no good deed goes unpunished.”

We bring you this in light of the fact that Mallon and his publisher recently released those two and a novel in the format known as Vintage trade paperback. The third released on Feb. 11 as a Vintage trade paperback is the novel, Bandbox. Bandbox refers to a hugely successful magazine, a glamorous monthly cocktail of 1920s obsessions from the stock market to radio to gangland murder and the man behind it all. Last we checked, Mallon was hoping to make a Dallas appearance later this year in conjunction with the re-release of these three. 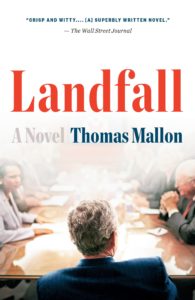 “Vintage paperbacks are extremely durable,” he says, noting that “lots of libraries acquire them, and they stay in print for ages and ages.”

But they also carry other advantages. As the author says, “All books on the Kennedy assassination are controversial — it can’t be otherwise given the great divide of opinion on the subject — and to be able to have a reissue of this one with a new set of notes and a new preface is very satisfying to me. Also, the electronic edition will now match this new one. It’s the version of the book that I want to be the permanent one as the assassination recedes even further into history.”

Mallon grew up on Long Island but carries a strong connection to Texas, where he once served as a visiting professor at Texas Tech University in Lubbock.

“But it’s the state’s history that wound up compelling me to return here in person for my books. A near-lifelong fascination with the Kennedy assassination brought me to Dallas and Irving to write about it almost 40 years after it occurred.”

During the George W. Bush administration, Mallon served as deputy chairman of the National Endowment for the Humanities, an experience that “set me up for writing Landfall, the last of the novels in a political trilogy that began with Watergate. Little did I know, in the fall of 1978 in Lubbock, that the losing local congressional candidate — yes, that would be George W. Bush — would loom so large in history and in my writing.”