By By Dennis Drabelle for The Washington Post
April 2, 2020

It hit me at the end of January, after a pleasant evening spent catching up with saved episodes of “Masterpiece” and other PBS shows that dramatize classic novels. Once again, all the sources were British.

Concurrently airing were E.M. Forster’s “Howards End,” Jane Austen’s “Sanditon,” Wilkie Collins’s “The Woman in White” and Frank Tallis’s “Vienna Blood,” a detective series set in the early Freudian era and based on novels by an English psychologist.

Going online, I found the “Masterpiece” archives stuffed with sagas derived from the likes of Dickens, Gaskell, Trollope and Hardy. Among the dozens of series listed as available for viewing, the only one with a recognizably American pedigree was Louisa May Alcott’s “Little Women,” which has been — forgive me, Greta Gerwig — filmed to death.

Why does PBS outsource almost all of its costume dramas to the Brits, in some cases simply importing and screening BBC productions as Masterpiece series? Why not look to the American canon for worthy novels in which men sport top hats, women get laced into corsets and carriages make their gravel-crunching way to glittering receptions or illicit assignations?

Let me make the case for a handful of vintage American novels as bully material for the multi-episode treatment that “Masterpiece” does so well.

In “Pudd’nhead Wilson” (1894), Mark Twain recycles the look-alike device from his earlier novel “The Prince and the Pauper,” but with a wrinkle. This time, one look-alike is “white” and the other “black” — quotation marks required because the near-doubles are light-skinned males born on the same day in 1830, in the same Missouri town. We’re back in Huckleberry Finn-land, where race puts conventional morality to the test.

The heroine of “Pudd’nhead,” a slave named Roxana, switches the two infants — one her own child by a white man out of wedlock, the other the legitimate heir to her master, whose wife died in childbirth. With the exchange, Roxana ensures that her son will be raised as a spoiled aristocrat and the true heir as a mistreated slave. The question becomes this: Will blood tell, or will the boys’ fates be determined by nurture?

Thought-provoking and sensational (there is a murder, followed by a courtroom showdown), calling for casting that illustrates how artificial racial distinctions can be, “Pudd’nhead Wilson” should make for great TV.

The eight-armed monster of Frank Norris’s “The Octopus” (1901) is the fictional Pacific and Southwestern Railroad, a thinly disguised version of the real Southern Pacific. The P&S shows its true colors in the first chapter, when one of its trains mows down a flock of sheep crossing the tracks. The railroad also bribes legislators, but its greatest sin is harassing farmers it informally allowed to settle on some of its land in California. Unless the farmers agree to pay outrageous prices to obtain title, the railroad will forcibly evict them. The farmers band together, setting the stage for a bloody shootout based on an actual incident from the year 1880.

One of the few American novels that rival “Moby-Dick” in scale and power, “The Octopus” would have thrived on the widescreen CinemaScope treatment of the 1950s. Here’s betting that it will do just as well on today’s jumbo plasma-TV screens.

Although Norris was a discovery of longtime Atlantic Monthly editor William Dean Howells, the protege dismissed his mentor’s fiction as having “the drama of a broken teacup, . . . the excitement of an afternoon call.” Norris must have forgotten about Howells’s most ambitious novel, “A Hazard of New Fortunes” (1890). 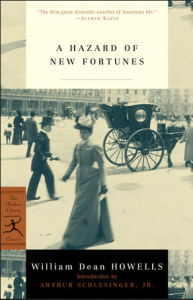 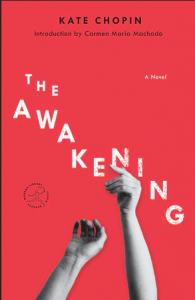 Set in New York City and centered on an institution that Howells knew well, a start-up magazine, “A Hazard” was inspired by an incident that shook him to the core: the kangaroo-court trials of men loosely associated — if associated at all — with Chicago’s Haymarket Riot of 1886. On its way to a brutal climax in which two major characters are killed, “A Hazard of New Fortunes” smashes teacups right and left.

“We know that in reality marriage is dog cheap,” says a character in “A Hazard,” “and anybody can have it for the asking.” But for Edna Pontellier, the protagonist of Kate Chopin’s  “The Awakening” (1899), marriage is dog-leash hard to escape from. After the book caused an uproar in Chopin’s native St. Louis and beyond, the author portrayed herself as hardly more than a bystander: “I never dreamed of Mrs. Pontellier making such a mess of things and working out her own damnation as she did. . . [and] when I found out what she was up to . . . it was . . . too late.”

With its seductive setting (New Orleans and the Gulf Coast) and its unblinking scrutiny of a woman who puts her own pleasure first, “The Awakening” is a liberating novel that doesn’t preach.

Speaking of preaching, a man who does it for a living is the titular hero of Harold Frederic’s “The Damnation of Theron Ware” (1896). Ware has the misfortune to be a liberal Methodist minister assigned to a conservative congregation. Moreover, he is not only married to the wrong person but also struggling toward a new self-understanding. Ware learns a lot from hanging out with two other women, one of whom is a debt-raiser — a preacher who swoops into town and whips up a stingy congregation into a frenzy of pocket-emptying.

With its shrewd characterizations and brilliant dialogue, “The Damnation of Theron Ware” is ready-made for the “Masterpiece” approach. Ideally, it and “The Awakening” would run back to back, underscoring the point that traditional gender roles were changing as early as the 1890s.

So there you go, PBS: five American novels packed with drama, period costumes and, to boot, controversies that still resonate today. You can supply your own gravel.

Dennis Drabelle is a former contributing editor of Book World.